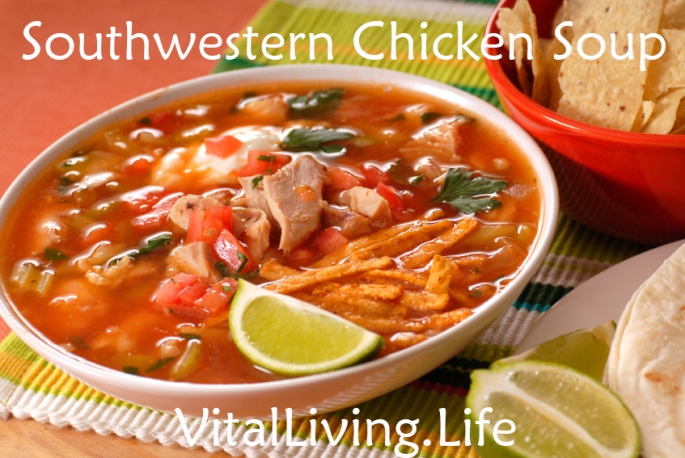 I made this for dinner on Friday night, and it was a-mazing! Finally I get to share with you something of my own creation. I love to cook, but admittedly the mexican-style flavor profiles are not my forte. I grew up with Swedish and English cooking. However, this tasted amazing and I’m very proud of myself for putting it together.

Olive Oil
4 Chicken Thighs cooked through, then remove the meat and chop to be added back into the soup later.
Medium Onion Chopped
5 Cloves of Garlic, Minced
Red Pepper Chopped
3 Pablano Peppers, Roasted, Peeled and Chopped
1 Anaheim Chili (or Green Chili of Choice), Roasted, Peeled and Chopped
14.5 Oz. Can Fire Roasted Diced Tomatoes
2 Cans Great Northern Beans, Strained and Rinsed
32 oz. Chicken Broth
Tblspn Ground Cumin
Tspn Red Pepper Flakes
Tblspn Fresh Chopped Parsley* (I don’t eat cilantro, but cilantro would be a tasty substitute for this)
Salt & Pepper
*I don’t eat corn, but corn would be good in this also if you do eat it.

Roast your Pablanos and Anaheims (I put mine under the broiler for a while on both sides until they’re skin is bubbled and browning), let them sweat in a closed container until cooled, and then peel, seed and chop them. Set aside.

In a soup pot warm your olive oil, and cook your chicken thighs through. Keep the lid on the pot and they’ll cook faster. Be careful not to burn, and flavor the chicken with salt and pepper while it’s cooking. Remove chicken from the pot and set aside on a plate and allow to cool before pulling the meat off the bones and chopping to be added again later.

In the oil in the pot sweat your chopped red pepper, onion and garlic together until aromatic. Add the ground cumin and red pepper flakes at this point. Cook for probably 3-4 minutes, stirring frequently. Add in the fire roasted tomatoes and stir until boiling gently. Add in the fresh chopped parsley and stir. I don’t eat cilantro, but it would be a tasty substitute for parsley if you like it. Add in the Pablano and Anaheims and return to boil.  Add in the chicken broth. Add in your beans, after you’ve rinsed them well. Finish by adding back in the chopped chicken thigh meat.

Let everything boil gently for 20 minutes. Salt and pepper to taste, and serve. We served it with tortilla chips, but sliced plain tortillas in the soup would be really good as well. If you eat cheese, adding some shredded cheese on top would be yummy. This soup has a little bit of heat, but not enough to be painful to eat, just enough to make you lips tingle.

It tastes amazing and is very flavorful!